AN England fan was over the moon after Iran grabbed their second consolation goal against the Three Lions.

England fans up and down the nation jumped for joy with each and every goal – although one supporter was more thrilled with Iran’s second of the match.

An optimistic punter placed a speculative bet on what turned out to be the correct scoreline.

Footage on social media showed the England supporter was a bag of nerves after the spot kick was awarded. 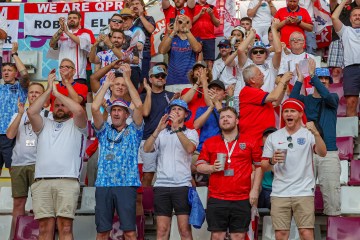 The lad was overcome with emotion as Mehdi Torabi prepared to take the penalty, walking around the pub with his head in his hands.

But he was soon celebrating a stunning win when the Porto striker calmly slotted the ball past a despairing Jordan Pickford.

The bloke was mobbed by his pals, who bundled on top of him in celebration before hoisting him in the air.

According to the video, the lad bagged a whopping £2,500 for his speculative punt.

Footy fans were quick to comment on the stunning win, with one saying: “That’s the bar bill sorted.”

Another said: “This is mint and insane.”

And another said: “New trim and jacket straight to the top of the list babbbbbyyyyy.”

Three Lions chief Southgate was thrilled with the team’s performance but wants them to be more defensively sound in their clash with the USA on Friday.

“We know that Iran are difficult to score goals against so it’s a credit to our players of the movement, the quality of our passing and finishing.

“At the end of the game, to concede two goals the way we did is not the level we need.

“We need to be better than we were today against the USA because they will be coming for us full throttle. We will have to reset.

“I don’t like games that drift and there were so many added minutes in both halves.

“I understand games drift, but that won’t be enough for us to progress. We still have a lot to do to qualify.”