Parents’ urgent warning after spotting deadly hidden danger lurking in the water – but can you spot it? 
A COUPLE’S kids were stunned to spot a crocodile lurking in a photo from their family holiday after failing to spot the beast in the water.

Rob and Nat Stupka were visiting the notorious Cahills Crossing in Australia with their two kids on Tuesday when the huge croc surfaced.

The family – who are travelling around Australia – stayed on the observation deck in Kakadu National Park to keep a safe distance from the river, which is home to around 120 crocodiles.

They have now warned other tourists to stay away from the water after highlighting how hard it can be to spot massive reptiles.

Rob and Nat saw a crocodile swimming among some rocks before it appeared to camouflage itself in the water.

But their kids failed to find the beast in a snap of the scene. 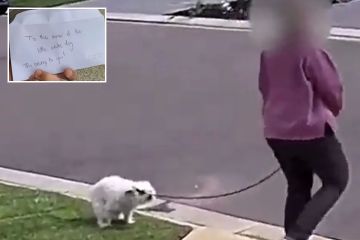 Nat told Yahoo: “The photo was taken to show the kids the crocodile hiding among the rocks as they couldn’t pinpoint it.”

Rob added: “It looks identical and the colour is exactly the same as the rocks.”

The crocodile is hardly noticeable in a picture taken from afar.

But in a second picture zoomed right in, the beast can be seen prowling by the rocks.

It comes after a chilling photo showed an unwelcome guest at a family picnic by a river.

The seemingly quiet riverside scene was disturbed – prompting the group to flee for their lives when they noticed a crocodile.

The beast lay hiding in the river as while the group enjoyed a day out in Australia.

At first glance, the reptile appears to be nothing more than a floating log in the murky water but after taking a closer look, the beast can be seen swimming just a few metres away from the family’s gazebo.