The Atlanta 1996 Olympics Games is arguably Nigeria’s best performance at the quadriennial games  to date. Team Nigeria won four medals in track & field , including its first and only individual gold medal; a silver medal finish in the 4x400m women’s relay and individual bronze medals in the Women’s 100m and 400m events. Oluwamayomikun Orekoya captures  the joy  of three of the amazing women that  led  Nigeria to  glory  in athletics.

As a junior athlete in 1986, Ogunkoya was one of the first Nigerian athletes ever to win a gold medal in an IAAF-organised championship, when she won the top prize in the women’s 200 metres.

Ogunkoya’s pioneering effort was not only at the junior level.

When Nigeria joined the modern Olympics family at Helsinki, Finland, in 1952, athletics was one the sports the country participated in. But the nation did not win her first individual medal on the track until Ogunkoya did it at the Atlanta 96 Olympic Games, with a bronze medal in the women’s 400 metres.

The race, won by French golden girl, Marie Jose-Perec, was the greatest 400 metres race ever in the Olympic Games. Six of the eight women in that final race dipped inside 50 seconds; the benchmark for women 400 metres. She later anchored the 4x 400 metres team, which also included Bisi Afolabi, Charity Opara and Fatimah Yusuf-Olukoju, to win the silver medal behind the American team.

Ogunkoya’s time of 49.10 seconds remained Africa and Nigeria’s record for 25 years after the race before 18 year old Namibian athlete, Christine Mboma did a blistering 48.54 seconds to break the record.

On Nigeria’s chances in winning a medal in Tokyo, Ogunkoya is of the opinion that the current crop of athletes has all it takes to succeed provided they work very hard and have the determination to win.

“In comparison, I would not say our era was the best because every era brings about different athletes and modes of motivation. I was motivated to succeed because I am a hard worker,” she said.”It feel I would have run both the 200 meters and 400 meters  in 1996 because I was in the form of my life but I am very, very grateful for all I achieved in athletics through hard work.

“About our present athletes, even when you work very hard and get injured, you can still break records because you know you have worked hard and that is what a lot of them do not seem to understand.

“Despite making money, some do not want to get a good coach that can monitor their training. If they don’t want to train with a coach in Nigeria, why don’t they get a coach in Europe or in the United States?

“Thank God that we had the opportunity of travelling to the United States but this current generation really needs to work very hard.”

“But I believe Blessing (Okagbare), Divine Oduduru and Ese Brume would be in the running to win medals for Nigeria in Tokyo.”

In terms of encouraging the athletes, Ogunkoya wants the Athletics Federation to pay the athletes their grants before competing and not after the competition, adding that to compete in the Olympics should be considered a privilege.

“Nigeria is for all of us so, if someone comes to represent this country in track and field, they deserve encouragement.”

“To be in the Olympic village, sharing the same stage with some of the greatest athletes around was a privilege.”

For the first Nigerian to win an Olympic gold medal, Chioma Ajunwa-Opara, climbing up to the podium to receive her medal in the Long Jump event still remains fresh in her memory.

Ajunwa initially played football for the Nigerian women’s team but then made a transition into athletics. Ajunwa performed notably as a track and field athlete at the African Games and African Championships between 1989 and 1991, before being banned from the sport for four years.

Chioma Ajunwa was a member of The Falcons during the Women’s World Cup in 1991 and she is the first African woman to win an Olympic gold medal in a field event.

“It still seems like yesterday,” Ajunwa reminisced. “The memory is very fresh and always brings on a nostalgic feeling.”

“Each time I remember climbing the podium to receive my medal, I equally remember the hard work, commitment, training sessions and the real effort to make myself and Nigeria proud.

“Every energy and time devoted for this remains a sacrifice but thankfully the sacrifice was worth it. At times I go the extra mile to train alone. I set targets and standards for myself.

“At the Games, it was a thing of joy to represent your country. I was and remain proud to represent Nigeria. That was the push to and for glory.”

The policewoman, whose African Long Jump record stood for 25 years before compatriot Ese Brume broke it in May, believes hard work, drive and being focused are the only guarantee for an Olympic medal.

“Every athlete at the Olympics is a potential medalist and every athlete participating in the final of any event is a potential gold medalist,” she said. “You should first aim at being a medalist by working real hard. If others are doubling their efforts in training, you must triple yours.

“By doing this you are gradually pushing yourself into the medal range which is by reaching the final of your sport or event,” She added. “Once you get to that final stage. You must appreciate and understand that anything can happen. The colour of the medal becomes a priority. You become more focused and aim for the best.” 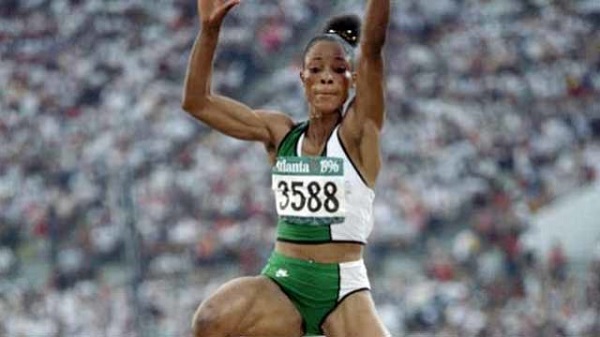 For Fatima Yusuf-Olukoju, Ogunkoya’s silver-winning team mate in 1996, competing in the Olympics was a thing of honour, especially after controversially being omitted from the 1988 Seoul Games by the then Nigeria Athletics Federation.

After eight months of training, she qualified for the 1988 Seoul Olympics, but she was only 16 — too young to compete without parental permission.

“I felt great and honoured to be part of the Olympic family,” she said. “It was a dream that came true for me having missed the 1988 Seoul Games as I was dropped from the team after qualifying. That is a story for another day.”

“It has been almost 25 years since we nearly won the gold medal at the 400 meters relay. It was an almost perfect day. I am grateful to have three other runners that gave their absolute best. Falilat (Ogunkoya) saved the day and gave us a medal because I placed sixth in the 400 meters finals. It was a lovely feeling to place second and get the Silver medal.”

She added that winning the silver placed them among the best in the world, an achievement that cannot be matched.

“Winning that medal placed us among the top three in the world and it was an achievement of a lifetime.”

The former African champion believes some Nigeria athletes can make it to the medals podium but is unsure which events would capture the medals.

“I believe that we have several athletes that can make the finals of their individual event in this year’s Olympic Games and anything can happen in the finals so I am wishing all of them good luck,” she said. “You know Nigerians; we always come through although I do not know which particular event would bring us medals.”