Mexico vs Poland – World Cup Group C: Team news, how they got there and prediction as Lewandowski battles Jimenez 
MEXICO take on Poland in a clash that is set to have huge round of 16 qualification ramifications.

With Argentina the overwhelming favourites to win Group C, there is a likelihood that Mexico and Poland will be battling for second place.

So whoever can grab a matchday one victory will have a huge advantage when it comes to making it through.

The match will see a key battle of the strikers, with Barcelona’s Robert Lewandowski lining up against Wolves’ Raul Jimenez.

Both are aiming to bag their first World Cup goals – having failed to do so in three previous games each.

Here, SunSport previews the clash that will have an enormous impact on which of these sides will make it through from Group C. 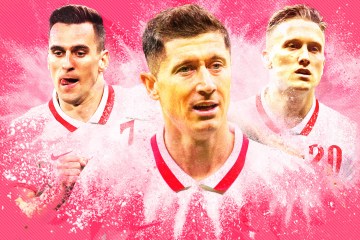 How did they get there?

Mexico: Gerardo Martino’s side qualified via the Concacaf route.

Through their Fifa ranking they received a bye to the third round of qualifying, before being pitted in a group alongside Canada, the US, Costa Rica, Panama, Jamaica, El Salvador and Honduras.

Eight wins, four draws and two defeats were enough to take Mexico through in second place behind leaders Canada.

Poland: Lewandowski and Co required the play-offs to get through to the finals in Qatar, despite eight group stage goals by the Barca star.

After finishing second to England in Group I, Poland drew Russia in their Path B play-off semi-final.

They were awarded a bye after Russia were thrown out following their invasion of Ukraine – before beating Sweden 2-0 in the final via goals by Lewandowski and Piotr Zielinski.

They comfortably beat underdogs Iraq 4-0 on November 9, before falling 2-1 to Sweden a week later.

In September they played twice in the Uefa Nations League – losing 2-0 at home to Belgium before winning 1-0 in Wales.

Everything you need to know about the World Cup

Who are the managers?

Mexico: Experienced boss Gerardo Martino is the man tasked with inspiring Mexico to a good run in Qatar.

The 59-year-old impressively led Paraguay to the quarter-finals in 2010, although didn’t take Argentina to a World Cup while managing the Albiceleste.

Martino also has plenty of experience in club football, including a season at Barcelona.

Poland: Czeslaw Michniewicz only took charge of Poland in January of this year.

The 52-year-old has plenty of domestic managerial experience in Poland, and was also manager of his country’s Under-21s between 2017 and 2020.

Who are the star players?

Mexico: RAUL JIMENEZ has won his fitness battle to lead the line for his country in Qatar.

The Wolves striker has not played for his club since August after suffering with a hip injury.

He made his return to action this week, playing 45 minutes in his country’s 2-1 defeat to Sweden.

Jimenez featured for Mexico at the 2014 and 2018 World Cups, but is yet to score a goal in the competition.

Poland: ROBERT LEWANDOWSKI has been in red hot form once again this season.

The 34-year-old has taken to LaLiga like a duck to water since quitting Bayern Munich for Barcelona in the summer.

He remains a talismanic figure for his country, having scored 76 goals in 134 caps.

But Lewandowski is still yet to notch at a World Cup finals… something he will be desperate to rectify in what will almost certainly be his last attempt.

What’s the head to head?

What TV channel will show the game?

BBC One will broadcast the match with a 4pm kick-off on Tuesday.

There will also be a live stream on BBC iPlayer.

This should be a really fun game between two sides that could really stake a claim for qualification to the round of 16 with a win.

Robert Lewandowski is primed to score his first World Cup goal, but Mexico have more than enough quality to cause problems of their own. We are predicting a score draw.