ROY KEANE awkwardly shared a touchline with Alfie Haaland but failed to reunite after his infamous 2001 horror tackle.

Haaland claimed his career was all-but over following Keane’s brutal challenge during a Manchester derby.

Over 20 years later, with Haaland’s son Erling starting for City against United, he provided punditry.

Keane was also working on the match for Sky Sports and according to Manchester Evening News, one TV station wanted the old rivals to reunite.

But they failed in their attempt as the former Premier League stars provided punditry separately.

Haaland Jr started for City in front of his dad, but admitted the two have never spoken about Keane’s tackle. 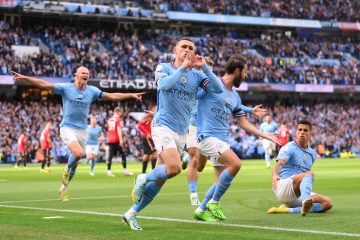 He said: “I haven’t spoken to my father about this game, but I know he will be in the stands watching.

“It means so much to all of the supporters – and as a fan I know that. We want to make them proud on Sunday.

“We know it is going to be a tough game, but I am excited to play in this derby.

“It’s another game, but I also know that derby games are so much more intense.

“These games mean everything to the fans.

“It is the first time I have played in the Manchester derby after watching so many on TV with my father and I cannot wait.

“It will be a special moment for me.”