CONOR McGREGOR reignited his feud with Khabib Nurmagomedov and accused his rival of “quitting” while offering a rematch.

The arch enemies are still trading insults over four years from Nurmagomedov’s submission win at UFC 229.

McGregor desperately campaigned for a shot at redemption only for his bitter foe to suddenly announce his retirement.

The Irishman is still keeping the door open to a rematch but claimed Nurmagomedov fears it.

McGregor, 34, posted in a now-deleted tweet: “I fight on! Your fathers plan is never complete because you quit and ran, brother.

“God bless. I’m still here if you want to go again. But your fear of defeat means you’ve already lost. 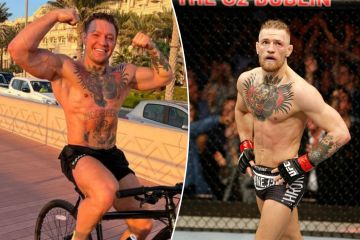 “Run from it all you want. We all lose in the end. Death takes us all. I fear nothing but God.”

Nurmagomedov, 34, hung up his gloves after beating Justin Gaethje, also 34, which followed after the death of his dad and mentor.

The Russian promised his mother that he would not fight on without the guidance of his influential father Abdulmanap, who died at 57.

He is now a UFC Hall of Famer and promoter, launching Eagle Fighting Championship two years ago.

He used McGregor’s famous “here to take over” roar to aim a dig at the ex-UFC champion and promote his company.